I’m going to discuss all three endings of Far Cry 5 (FC5).  So, there will be spoilers here.

It’s achieved simply, at the very, very beginning, by not handcuffing The Father.  Eventually you’ll all just walk away, and the game will end.  For what it is, it’s a cute ending and makes the game a damned sight shorter.  Of course, it lacks a little in the ‘long term fun’ department, but that’s not really why it’s there.

Both of the other endings take place after you’ve killed Faith, John and Jacob and go to confront Joseph (A.K.A. The Father).

The Father is a little pissed with you, and has captured all your friends (those in your Roster – minus the animals), and those law enforcement folks you came with.

Despite everything, he’s willing to let you to take your friends, walk away, and leave Hope County.  If you do, then all the law enforcement folks get into a truck and drive away.

The Sheriff says that you’ll walk away, and get the National Guard to burn the place to the ground.  He turns on the radio, and the song that Jacob conditioned into you plays – and the world goes red …

Of course, the implication here is you tried to murder everyone, since that’s the kind of thing you did under the influence of the conditioning.

I’m not a huge fan of this ending.   I suspect it’s supposed to be a humorous ‘gotcha’.  And while I smiled a little, it was more a ‘meh’.

On the other hand, given they were just walking away, I have no idea how the story would have ended otherwise! 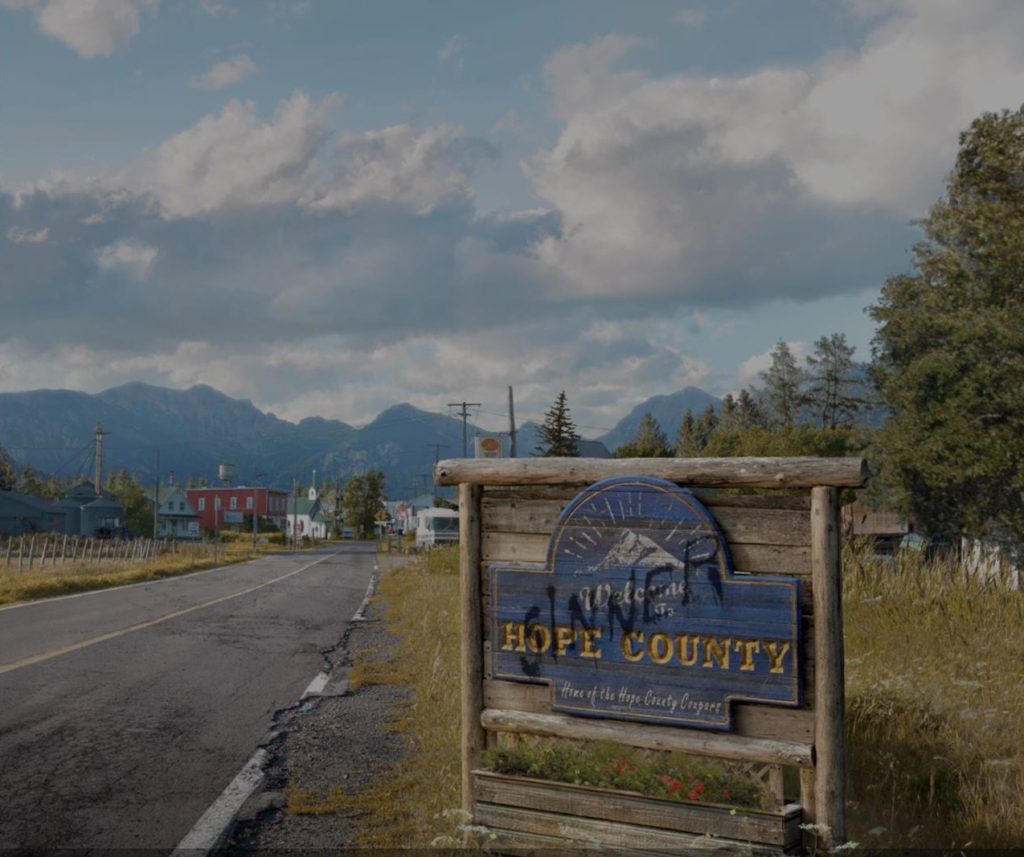 If you ignore The Father’s generous offer, then he starts spouting more scripture and turns over two barrels of bliss that immediately get you high.

He turns your friends against you, and you need to disable1shoot then “revive” them so they’re on your side again.  Meanwhile, The Father is teleporting all around the place, being angry and shooting at you.  If you take too long to revive a friend, then they’re turned back to the Dark Side and you have to shoot them again.

Once you’ve finally ‘rescued’ all your friends, and shot The Father enough, you get to … handcuff him.

Then all Hell breaks loose as atomic bombs are going off all over, thus proving the smug git right.

You all get in a truck and drive towards Dutch’s bunker, where you started the game proper.  Just as you get close, a tree comes down and … fade to black.

You wake up enough to find you’re being carried down into the bunker.

You wake up again to find Dutch on the floor, dead, you tied to a pole, and the Father Gloating about how he was right, and how you’re his only family now. 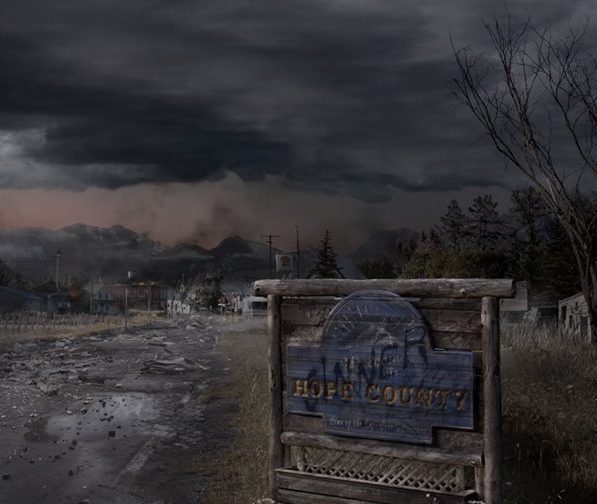 After The End Of The World

Frankly, I hated this ending.  When they went to handcuff him, I was nearly yelling at the game to “Shoot the bastard”.  Of course, this was a cut-scene, so my character didn’t do the sensible thing and shoot him.

The fact that the world ended at that point just made it weirder.  My eyes nearly rolled out of their sockets at that point.  And I figured after the car crash The Father would be back.  I didn’t quite expect how he came back, but it still happened.

I would have been ‘fine’ with this ending if there was a possibility of another ending where you shot the bastard.  Sure, the world still ends, and maybe you all die, but really, give us some cathartic release from this smug extremist!

The entire game has been building up this moment.  You went up against the three ‘Big Bads’ that all had opinions on why your character was doing what they did, and what  ‘sin’ was.  Your silent protagonist couldn’t reply, but you did get to kill each one.

Then you have the Father, who is shown to have complete control of these other three.  He’s the mastermind; he’s the ultimate Big Bad.  The way he’s set everything up, killing him won’t take the Cult out completely, but it will demoralise what’s left of it, and they’ll cease to be much more than a minor threat.

But instead, all of this buildup leads to … he was right, and he gets to lord it over you for the rest of your life.

Sure, leave that ending as a possibility if you don’t shoot him/disable him/whatever him.  But there should be an ending where you can be satisfied, where you get that release from the tension the story has built up.  Even if the world still ends, there should be that payoff.

Interestingly2If you’re anything like me, that is, they’ve made the decision to allow you to continue playing after the ‘final’ endings.

In the case of the “Walk Away” ending, the mission to meet The Father is still there.  So you can easily see both endings by using that.   Once you’ve done the “Resist The Father”, then the background of the main menu changes to the town of Falls End ruined by the Nuclear Holocaust.  However, you’re alive, and The Father is listed as taken out.

I’m about to read far too much into this, so bear with me.

Since you’re alive, and not tied up in Dutch’s bunker, with The Father calling you family,  and since Dutch is still alive,  and since the world outside shows no signs of atomic destruction then: the Holocaust didn’t happen.   None of that ending was real. It was all a Bliss hallucination.   Perhaps The Father really did die.  But who knows?

You can go back to his compound and find some of his Cultists hanging around, but no Father.

So essentially, you won. Right?

That still doesn’t make up for me not being able to actually end it properly!

A Geeky Gamergrrl who obsesses about the strangest things.
View all posts by Lisa →
This entry was posted in Video Games and tagged Far Cry, Far Cry 5, PS4, Video Games. Bookmark the permalink.