This time the setting is Hope County, Montana1I’m told that while Montana is real, Hope County is not. A religious Cult (Project Edens Gate – or ‘Peggies’ to the locals) has become strong enough to control the county.  As you’d expect with a Cult they’re single minded, see everything through a prism of their beliefs, and think the world is going to end.

When ‘The Collapse’, as they call it, comes they want to be ready to save mankind.  Of course, their version of ‘save’ and yours might be a touch different.  I know I’m not big on forcing drugs onto people, killing those who oppose me, breeding superwolves2Well, maybe that one and being a smugly humble arsehole.

You begin the game as a deputy coming in with a team to arrest the leader of the Peggies, called ‘The Father’ (they’re original, aren’t they?).  The local Sheriff thinks this is not a good idea, but has to go along with it.  Of course, it all goes wrong.  Everyone else in your group is captured, and through luck, you’re found by a guy who isn’t too fond of what the Peggies are doing to his neighborhood.

This guy, Dutch, is ex-military and he serves as your 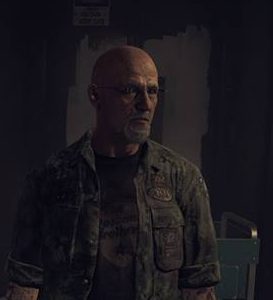 This moody bugger is Dutch

teacher to bring you up to speed on the area and its problems, and as your guide, pointing you at things to kill, capture or otherwise.

The  county is broken into essentially four sections.  Three are controlled by The Father’s children (I don’t think he’s actually their biological father – more like brother): John, Jacob and Faith.  The last is The Father’s compound.  In order to take back each area you have to earn enough ‘Resistance Points’ (RP).  To do that, you liberate enough strongholds, destroy enough resources, and free enough civilians that a confrontation with the leader of that area is forced.  Kill them, and that area is free. 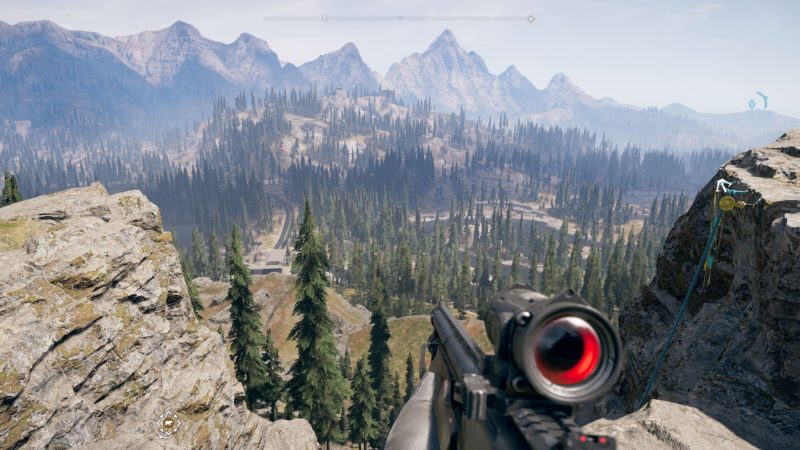 Once you’ve taken those three areas, you can force a confrontation with The Father and save the day.

For those who have played any of the Far Cry series, most of this will be familiar.  You have many different types of weapons, multiple ways to approach each scenario, and a whole open world that wants to kill you. You also have various vehicles that you can drive, fly or pilot.

You start on a small island, with a few examples of the sorts of challenges to overcome.  There is a shrine to destroy, a few encampments to liberate, and a Prepper Stash to open.  Once you’ve finished the island, the game lets you loose on the bigger world, and then it’s up to you how you approach things.

There are definitely a few changes to earlier entries.  For a start, you no longer have to hunt for 10 weasel skins in order to craft a bigger wallet.  Your inventory has enough room in the beginning to two weapons, medikits, ammo for all weapons and a few other things.

To expand what you can carry, you now use ‘Perk Points’ (PP) that unlock perks.  Some of these are related to killing things. Some add weapon slots. Some expand your inventory.  Some expand the way you can play – for example, adding a grappling hook to your tools.  They all have certain PP costs. Some rely on unlocking earlier Perks. Some you can unlock at any time, given enough PP to spare.

You get PP in two ways.  Firstly, if you find a Prepper Stash3A ‘Prepper’ is someone who works to prepare for the worst.  They’ll have ‘impenetrable’ shelter, food and water stockpiled and be prepared to retreat from the world until things settle down. (usually an underground bunker) there will be magazines that give you one point each.  You sometimes find them in other places too, but they seem to be in all Prepper Stashes.

The other way is completing ‘challenges’.  These are basically your standard shooter challenges: Kill X people. Kill X people with a shotgun, and so on.  There are a lot of them, so with the stashes, and the challenges, there are a shedload of perks to be found.  I’m about 3/4 through the game (I think) and I’ve got a huge chunk of perks and am having to decide which I want to play with, rather than which I need.

The tone of the game is the usual mix of serious and silly.  On the serious side, people are being kidnapped, tortured, brainwashed, killed and forced to listen to sermons4Maybe that comes under ‘torture’?.  On the fun side, you have a conspiracy theory guy who thinks that aliens are real, or a wannabe Senator who wants you to arrange accidents for Peggies because they might not vote for him.

For whatever reason, none of it seems too silly to fit into this world.  But that’s people for you, right? 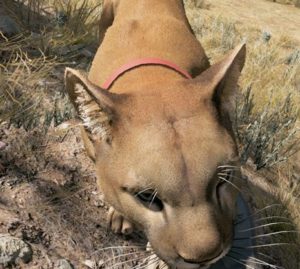 Once you find and complete missions for ‘special characters’ they appear on your roster. In the beginning you have one slot that you can assign someone from your roster to. They become your companion, and you can give them simple commands that come down to ‘move to here’ or ‘kill/hurt this person’.  How they achieve that is often up to them.

The human characters, even the stealth one, just irritate the hell out of me, as they’re usually screwing up as I move around silently to try to work out the best hiding/killing spots. 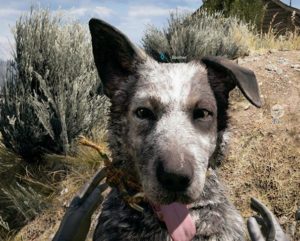 On the other hand, now that I have the dual companion perk, having a dog (Boomer) as one companion, and a cougar (Peaches) as my other, makes for a great deal of fun.

But none of your companions are invulnerable.  If they take enough hits, they collapse.  You then have a limited time to get to them and revive them.

If you don’t revive them, then you get a countdown before they’re available again.  That countdown can be shortened with a perk; but not eliminated.  So don’t always treat them as tanks!

Oh, and as an aside, you can pet your animal companions.  Or really any friendly animal. I approve of this.

Using stealth still exists in this world, though a couple of the nice perks that I used to enjoy have gone.  The main one I miss is the one that meant I could silently take someone down and immediately drag them out of sight.  For a non-stealth play through, I doubt anyone would notice the lack of that.

So far it’s been possible to stealth pretty much all of the challenges.  A few are just easier if you go in with a decent weapon; but I’m usually content to watch, wait and then kill from the shadows.   I’m glad that you can pick your method of approaching things.

One thing against staying with the same method is that you may not complete challenges (and therefore get PP) as quickly.  So it’s sometimes worth changing to a different weapon and going wild with it.  On the other hand, I haven’t really focused on the challenges too much, and I’ve still been racking up the PP.

The Peggies have a concoction (that seems to be derived from white lillies) that is hallucinogenic.  Their shrines have barrels of the stuff leaking it out. Some of their bullets have it.  It’s one thing they use to brainwash people.

If you come across a field of poppies, or swim in a body of water polluted with the stuff, your vision starts to go very strange.  I rather like the effect, but it can be disconcerting – especially in an enclosed area while using your torch for illumination!

It’s not a bad mechanic/prop and gives a few more ways to make the Cult into evil megalomaniacs.

One of the strengths of the Far Cry series is the gameplay that emerges from all of the different systems working together.  Mixing people, wild animals and weapons can produce some unexpected happenings that I doubt could be scripted easily.

For example, there are sometimes wild animals caged in occupied compounds.  If you can somehow get that cage open (like shooting the lock), then that animal has a good chance of doing half your work for you.

Sometimes wild animals will just wander in and start the mayhem.  Or you can toss bait and hope a wild animal follows through for you.

I’ve seen a bear and a moose fighting, then one turned on a nearby enemy before going back to the fight when the human was dead.

There’s a lot of little things like that to play with to see what happens.

So, I’ve had many, many hours of fun with FC5.  There are a few annoyances, some of which I’m writing up in another article.

I’ll mention here a few of the interface nitpicks.

Firstly, the ‘square’ button on the PS4 controller is the ‘action’ button, and is context sensitive.  With it you can loot enemies, swap your current weapon for another, enter a vehicle, unlock a door and so on.

The major problems come when the area over which the game detects a swappable weapon, and the area over which a game detects a lootable body, often overlap far too much.  One of the most annoying things about this is when I go to loot an enemy, and end up swapping out my hard earned, customised weapon for a piece of junk.  You can swap back again if you notice and if you can get the game to detect your weapon in amongst a stack of bodies and other weapons.

There are a few other little niggles, like not being able to easily interrupt reloading a weapon to use it. That makes sense if you’re putting in a new magazine, but it doesn’t make much sense if you’re shoving 6 more shells into a shotgun – one by one!

The last one that I’ll mention here is the bloody sermons.  The loudspeakers in compounds continuously play the local leader’s sermon.  It’s all Cultish, kooky stuff. It can be amusing, or frightening, or boring, depending on your world views.  What it very quickly becomes is irritating as it drones on and on, and then repeats. And repeats.  Every compound in an area has the same damned speech.

I tried shooting the speakers out, but apparently that’s one thing you can’t do.  Damnit.

So, while it’s not perfect, it’s a fun game for me to play.  There’s so many activities, and the world feels quite alive (and trying to make you not alive) that there’s a lot to do apart from saving the world (again).  I’m definitely glad I bought this!

A Geeky Gamergrrl who obsesses about the strangest things.
View all posts by Lisa →
This entry was posted in Video Games and tagged Far Cry, Far Cry 5, PS4, Video Games. Bookmark the permalink.