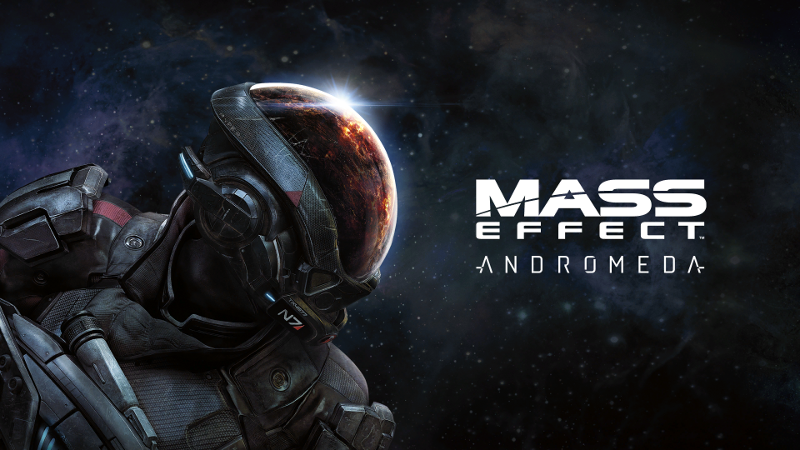 I was curious how Bioware would do Mass Effect: Andromeda (MEA), given that (as best I can tell) the Mass Effect relays where destroyed at the end of Mass Effect 3 (ME3) and, I think, most of our crew were dead.  Or changed. Or something.  Really, it was all very confusing.

Suffice it to say that it felt very final … ish.

MEA technically begins before the end of ME3 destroys their fastest way to get anywhere.  Arks are sent towards Andromeda, 2.5 million light years away from our own Milky way galaxy.  They use the Mass Effect relays to get as far as they can in the Milky Way, then head off though ‘dark space’ with people in cryo-sleep.  Their destination is a set of ‘Golden worlds’, worlds that from a distance, appear to be perfect for starting new settlements.

Of course, things go wrong when they get there – otherwise there probably wouldn’t be a game.

You play as [insert  whatever name you like here] Ryder.  Of course, since this is a Bioware game, your first task is to choose the gender and facial characteristics of your character. It’s all pretty standard sliders, or you can pick some standard presets.

From there you’re introduced to the world and find that your father is the Human Pathfinder1A Pathfinder is the person responsible for finding, and making ready new worlds for settlement, and that your twin2Who is whichever gender you didn’t choose is still stuck in cryo due to an accident.

Every Pathfinder has an implant in their head that gives them a symbiotic connection with their Ark’s SAM (Simulated Adaptive Matrix) – an Artificial Intelligence.  This gives the Pathfinder more computing grunt, meaning (from an in world perspective) they can do things ‘better’. Their physiology can be better, and anything they ‘scan’ can get more detail.

MEA plays in a similar way to ME3: you are in third person with  (mostly) two squadmates and you use a map on your ship to navigate to various systems and planets.

You also get a vehicle to use in this game: the Nomad, a six wheel drive machine which can go pretty much anywhere (and drop from any height!).  What’s different in this game is just how much you use the Nomad.  Almost all planets are a huge area that you can drive around.  There’s less of the ‘follow this path’ and more of the ‘get to this waypoint in whatever way you feel like’.  You really do get a sense of exploring the new worlds.

To make things easier, there are locations marked for ‘Forward Stations’.  As you reach each location, the Forward Station (a lander type craft) drops down, and you can now use this as a station to fast travel to, change your load-out, and refill your ammo.  In more hazardous environments, these are also a safe harbor from radiation/cold/whatever.

The Other Galactic Players

We have some brand new enemies, the Kett, who remind me a little of the Collectors in ME2.  We have an enigmatic race, The Remnant, who have left monoliths and more around the place – and who have still active defenses in some places. We also have the Scourge, which appears to be some kind of Dark Matter filament that (so far) is not well explained – but is dangerous to ships touching it.

There are a lot of missions on each planet, on the space station you dock with (The Nexus) on the original Ark you came in (The Hyperion) and, of course, with your own crew on your own ship (The Tempest)

Some of these are the standard ‘go here, kill this’, others are ‘scan this’, while others are going from location to location following a trail.

There are also  a lot of numbers to track in this game.  First, you have the standard eXperience Points (XP) you get for various actions.  Those can go to upgrading your abilities: broken into Combat, Biotics and Technology.  Each of these has sub specialties, with their own trees of skills.

Then, there are three types of tech you can Research.  As you scan things, and discover things, you get ‘Research Points’ in ‘Milky Way’, ‘Kett’ and ‘Remnant’.  From these you can get new weapons, armour and augmentations for those.

Then, you have AVP (Andromeda Viability Points). This is a rather cute abstraction in the game world, where the more viable you make the area for colonisation, the more people you can get out of cryo to populate the worlds.  The upshot of this is that for each point you spend, you get a perk.  These perks are in Military, Research and Commerce.  So you can get regular supplies of crafting materials, more inventory space and …

Did I mention there’s an inventory?

I think this is one area where they would have been better to abstract it away.

Every unique type of item takes up a slot in the inventory.  So you can have one ‘iron’ or 20,000 iron, and they take up one slot.

You begin with 50 slots … but those do get taken up.  Every material, every component you find for weapons or armour, every weapon you find, these all take slots.  Then you run out.

You can get more slots back by selling some stuff, or destroying some items to produce more materials, but that’s pretty much the extent of the inventory management.  There’s also a perk (as I started to mention) from the AVP that gives you 65 slots instead.

Even that’s not enough. So there’s another perk to give you 150.  Yeah.

Really, I wish they’d either made this proper inventory management, or dumped it completely in favour of abstracting it out of the experience entirely.  This halfway house feels clunky and more than a little opaque.

Scanning, is one of those wonderful terms used in Sci-Fi that can do pretty much anything the story requires.  Because your Pathfinder is liked to SAM who augments their abilities, their wrist scanner (that many others in game have) can find more information than others.  This can be used to find connections (conduits) between (say) doors and control panels; or to use information from a room to recreate the last moments of whoever was there; or … you get the idea.

This can be used for everything from troubleshooting, to merely getting in-world information on objects (usually resulting in XP or Research Points) to seeing the scene of a crime as it was at some point previously.  It’s a wonderfully broad tool and means that you can have some vague ‘detective’ sections so that not everything is ‘kill’.

Is It Mass Effect?

I guess one question that comes to mind is: is this still Mass Effect?  The Mass Effect relays aren’t a thing in this part of the Universe.  There is still the Eezo element, but unless you dive into the codex, you won’t get a lot of in-game chatter about it.  The biotics still use Mass Effects, but again, there’s not a lot said about it.

I think the core ‘feeling’ is there, though.  This is the same universe, with roughly the same technology.  There are enough callbacks to the earlier Mass Effect universe to make it feel like another branch of the story (not a Sequel as such, just a branch that started before ME3 finished).

I am hoping they’ll do more of these, and that they’ll either reveal more about the Remnant, the Kett, and the Scourge, or they’ll build up the mystery on them without ruining it.  Either works for me.  As long as things are enigmatic, but consistently enigmatic in world, I can deal.  However, for the Remnant to be brought down the way Reapers were in the original trilogy would be … not satisfying.

So, I guess I’m back to other games now…

A Geeky Gamergrrl who obsesses about the strangest things.
View all posts by Lisa →
This entry was posted in Video Games and tagged Mass Effect, Mass Effect: Andromeda, PS4, Video Games. Bookmark the permalink.