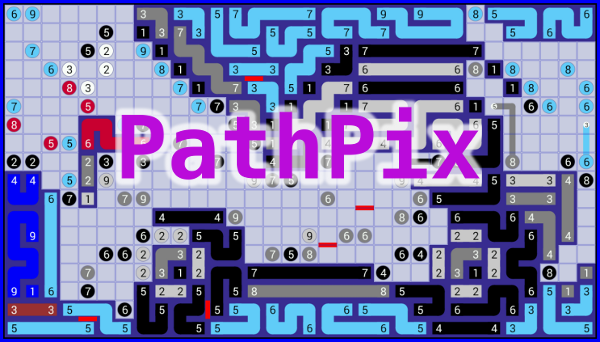 I was in the mood for some puzzling before sleep one night, and PathPix came up in the Google Play Store as recommended by a friend of mine.  I downloaded  ‘PathPix Lite‘, which is a free version that has 9 puzzles, and that let me decide if I liked the game or not.

I finished the 9 puzzles, then quickly bought the full version, which has 189 puzzles.

The mechanics of the puzzles are very simple.  There are numbers scattered over a grid.  Each number represents the number of squares that must be traced from that number to another matching number.  So if the number if ‘5’, you need to have a line of 5 squares (3 plus the two marked ‘5’) joining two 5s.   The paths don’t have to be straight, and can bend around corners, or even spiral inside themselves – as long as two paths don’t try to occupy the same square. By the end of the puzzle every single square must be filled in by a path.

I’m still trying to nail down exactly what makes these puzzles so much fun.  Possibly the most obvious thing is the visual appeal.  Paths can be all different colours and when you finish the puzzle, you ‘zoom out’ to find that those paths all form a pixel-art image.

There’s also the ease of use.  You use a finger to drag the paths, or drag them back to undo small errors.  You double tap on paths to remove them entirely. You use a finger over anything other than a number to scroll the ‘playing field’ around.  You can also zoom the field in and out as you need to.  All of this is very easy, very fluid and feels very natural.

Still, if that’s all there was, I suspect I wouldn’t have completed about 150 puzzles so far.

One thing that occurred to me was a problem I had when I used to enjoy Sudoku. I had several Sudoku apps – some generated the puzzles randomly, others were ‘hand created’.  The problem I had was that the harder they got the more likely I’d need to undo some guesses, and that was often a pain.  Even pencil and paper didn’t give me a solution I liked.

With PathPix, I sometimes find I’ve completely screwed up a section and need to clear it out and start again.  I find it very, very easy to do that, and that means I’m far more comfortable with guessing on the harder puzzles.

There’s also a ‘zone’ I can get into, where I can recognise certain patterns in how the numbers will join, and so that leaves a lot of my brain free to deal with the harder aspects.  For example a ‘3’ will always be a straight line, or have one bend.  That often means you can quickly scan through the 3s to fill in some chunks of the puzzle, all while you’re studying the rest to work out what to tackle next.

I’ve found that there are times that playing almost becomes meditative as you move from the 2s and 3s (and often 4s) to the larger numbers.  Having realised this, I downloaded another bunch of puzzles in the same vein, PathPix Zen.  However, these didn’t seem to have the same effect as the others I could zone to, and in fact seemed far harder and less relaxing.

I’d like to try to nail down exactly what makes a meditative puzzle so I can discuss it with the developer, but it’s proving elusive.

Still, regardless of whether I can slip into that zone, or whether I have to battle to complete chunks of a puzzle, the end result is that I feel like I’ve beaten the puzzle and accomplished something.  I’ve yet to get to the end of any of the puzzles and feel “glad that’s over”, which may be another reason I move onto the next one so I can get that ‘buzz’ again.

So far I’ve also bought PathPix Magic, which is a set of vaguely ‘magic’ themed puzzles, with the bonus being that there is more a mixture of easy through to ridiculous, to cope with all my moods.

All this is to say that as a puzzling game/framework/genre, I really love the PathPix series and I’m not sure what I’m going to do when I finish all the puzzles in all the games!

A Geeky Gamergrrl who obsesses about the strangest things.
View all posts by Lisa →
This entry was posted in Video Games and tagged Android, PathPix, Video Games. Bookmark the permalink.