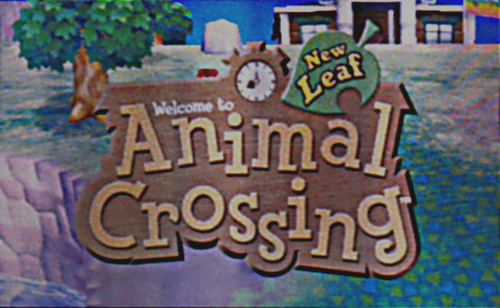 A friend bought me the first version of Animal Crossing (AC) on the GameCube and on first playing it, I wondered why the hell I’d bother.  A few weeks later, after rearranging my RL schedule so I wouldn’t miss important happenings I still wondered that.  But my heart wasn’t in it – I was hooked, lined and sinkered.

I also bought Wide World for my Nintendo DS the moment it came out.  I was in the US at the time, so I got a copy earlier than if I was in Australia.  Luckily, my then partner was also into it, so we’d visit each other’s towns, share tips and generally have a lot of fun with the whole ‘wide world’ side of things.

I never got around to buying a Wii, so I missed the Wii version of AC.  Which was disappointing.  But when the 3DS version was announced, I pre-ordered immediately.  It turned out that I nearly had a year to wait at that point!  So much time, that my ‘pre-order’ timed out in the shop’s system…

Still, I have now had a few hours playing with AC: New Leaf (NL) and I am a very happy wolfie so far.

It’s always interesting to see what changes they’ll make to the formula, what new characters they’ll introduce, or perhaps which will disappear.  The various shops have mostly moved out of town, across the railroad track to an area called “Main Street”.  Tom Nook no longer runs the store, but now runs a Real Estate business – which means that he can still gouge you for a house.

Tom’s nephews (Timmy and Tommy) now run the store which, as usual, starts as a small shack like affair.  The Able sisters still run their clothing store, but have another store attached that sells accessories.

Blathers still runs the museum, but his astronomist sister appears to have … disappeared.  The cafe is gone (at least at the start – there are some buildings that look like they might open later).

Also, the Mayor, Tortimer, is retired to be replaced by … well, you’ll have to play the game, won’t you?

As usual, one of the first orders of business is to get yourself a house and dive into debt with Mr Nook.  You can get a plot of land easily, but until you can afford the down-payment on the house you’ll be living in a (quite spacious) tent.

The graphics have also undergone a bit of a facelift, seeming to be slightly prettier and a bit less chunky.  I love the new water effects, and the new animations when catching fish.  Luckily the animals (and your character) retain their old cartoony likeness.

It seems that you can customise houses even more now, with various hedges, fences and roof styles on display on various animal’s homes.  However, I’ve yet to actually get my house, so I haven’t had a chance to play with that yet.

I will say, this is one of the few 3DS games for which 3D is a real benefit.  The “rolling log” landscape is incredibly effective with the 3D, as are activities like fishing and catching bugs.  The flat night sky in the background just really adds to that look.  In fact, there’s a park/lookout at one end of Main Street that looks over the ocean, and with the 3D I’ve found it to be a very beautiful and relaxing little place.

I’m mostly happy with the changes they’ve made, though I do miss Tortimer (the Mayor) and I’m hoping the coffee shop returns! I need my coffee, even in virtual land!

Overall, though, I’m really enjoying the new AC and it’s been worth the wait!  I hope I still think that in a months time. Or years.