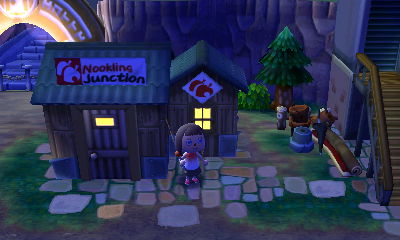 One thing that I find both good and bad about many games is how they introduce the various mechanics/characters/story elements.  A game can benefit a new player by introducing things slowly and letting the player get used to each one before introducing the next.  On the other hand, an experienced player can feel frustrated or held back by having to wait for specific points before they can do things that they know are possible, but aren’t allowed by the game yet. I recently replayed Bioshock Infinite, and that illustrated my point nicely.  On the first play-through  things were introduced at a reasonable pace allowing both the atmosphere to build, and not overwhelming the player with too much at once.  On the other hand, on my second play-through  I couldn’t (for example) explore the skyrails with the  hook until I got to the point where the game would let me – and that led to frustration and disappointment.

As mentioned previously I’m currently playing Animal Crossing: New Leaf (ACNL).  Now, I’m an Animal Crossing (AC) player of old, and I know how a lot of it already works.  And I assume it works a similar way in ACNL.  We all remember that saying about assumptions, don’t we? Still,  I’m familiar with the old tools (they have introduced at least one new one, it seems) and how they work.  In the beginning I couldn’t, for example, seem to find the watering can.  The shovel, net and fishing rod were turning up in Nooklings (shop) but the watering can, axe and slingshot weren’t. It turns out, at least for the watering can and axe, you need to wait until the Garden Center (run by sloth Lief) is built.  This was frustrating to me, as I wanted to water flowers, rearrange (i.e. chop down) trees and shoot those lovely presents that floated over the town. On the other hand, a lot of new things were already being introduced in their own way.

You can now start  “public works” such as building new bridges, clocks, benches and the like.  The game eases you into this by first requiring that you have your own house set up, and that you have 100% approval rating with the other residents.  This means you have to essentially settle into things before you start on the more complex things.  Each public work also takes time, as you need to raise the cash.  The other residents appear to put in a little towards it, but if you want it built in days, rather than weeks, you’ll need to put up the Bells yourself.

So, now we have yet another thing to spend your cash on. And finally I realised that the ACNL team had neatly turned the ‘gentle introduction’ thing into a game mechanic.  Things that you used to get ‘for free’, you now have to work for.  Each step forward becomes a goal, an achievement in itself.  For example, you eventually get the option to build a police station – so you can have a lost and found.  You’ll also eventually be able to add another floor to the museum, or to add a coffee house. Add to that,  there’s still the concept of the Nooklings upgrading (to become T&T Mart in the first instance), and new stores are also built at various times.  I mentioned the Garden shop above, and now a shoe store (for shoes, leggings and the like) has now appeared in my Main Street.  Ex-Mayor Tortimer returns in a cameo to re-introduce Kapp’n, who can take you to a Tropical island where Tortimer has retired.  This island introduces even more ideas (such as diving). So, while not having access to the toys I know and love was a little frustrating at first, on balance I think ACNL gets it right in its pacing by changing the way things work.  Not only can I enjoy new mechanics, but I now have more goals to aim for, and more things to achieve.  This leads to more fun for me!

A Geeky Gamergrrl who obsesses about the strangest things.
View all posts by Lisa →
This entry was posted in Video Games and tagged Animal Crossing, Animal Crossing: New Leaf, Nintendo 3DS, Video Games. Bookmark the permalink.