Everybody’s Gone To The Rapture – The Story – Part 3

I’m going through my thoughts on the story of Everybody’s Gone To The Rapture (Rapture). Part 1 of this, where I give a rough outline of the story, is here.  You might want to read that first. Part 2 is where I discuss ‘The Pattern’.   Or you can jump in with both feet and continue reading.

It can’t be that bad, surely.

As before, here’s the disclaimer: A lot of what I’ve written here is supposition and guesswork.  I get very tired of writing ‘maybe’, ‘perhaps’, ‘possibly’ and the like and I’m pretty sure it gets tiring reading that.  So I’m going to leave those types of words out a lot.  But bear in mind that this is all guesswork and supposition.

By the end of the story, Kate is the ‘only one left’.  This suggests that The Pattern has removed/converted all the people in the world – except for her.

We know that it killed birds and cows in the beginning, but does that mean the world is now devoid of all life?

There are still insects around, but we already know it didn’t affect them as badly as ‘higher’ life forms.  There are also birds around.  Quite a lot of them.  Either not all the birds in the valley were killed (though a lot were – there are carcases everywhere), or those outside the valley were spared once The Pattern realised they weren’t ‘useful’.  This also suggests that other life forms still exist.

How far down the ‘evolutionary bush’ we have to go before we hit beasts that survived, I have no idea – and there’s no hint in the story.  Certainly only birds and insects are in evidence.

Now we get to the first question I had while exploring Rapture: ‘who am I?’. Who is represented by the avatar I’m moving around and interacting with the world in?

By the end of the story it was quite clear: I still didn’t know.  Though I (and others, of course) have theories.

The one thing we know by the end is that only Kate survived – or that she believes she’s the only one.  We don’t know if she was still fully human, some symbiont with The Pattern, or perhaps just Liquid Light herself.

The fact that she survived the gas, and attributed it to  The Pattern somehow protecting her really suggests that there was some bond there, likely symbiosis to my mind.  She was certainly still able to do physical things, whereas its never really mentioned if The Pattern can affect things other than life forms. 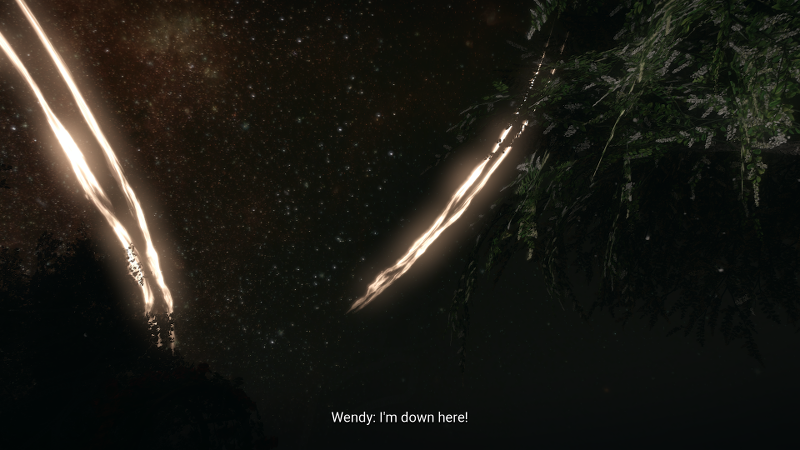 Planes (or memories of the planes) as they bomb Yaughton.

Given that she’s presumably the only human left (or physical being, perhaps), and this ‘avatar’ can walk around, open doors, gates and the like, then I’m going to assume this is ‘Post Event/Rapture’ Kate. A Kate merged with The Pattern.

So what’s with the scenes that play out?

As Pattern-Kate moves around she interacts with both The Pattern, and what seem to be ‘light’ versions of the other residents.

There are really two types of scenes.  The first is simply one that plays out when you’re near enough.  The second is the ‘black hole’ type orb that you need to tune into. 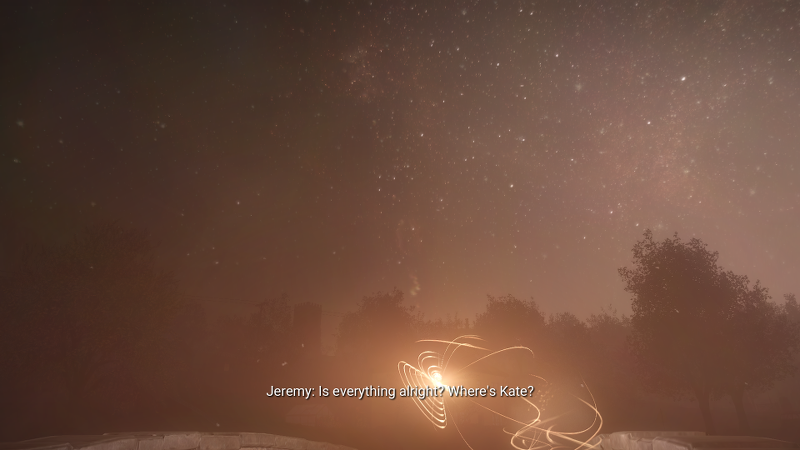 One of the ‘Black Hole’ Scenes, complete with ‘attractor’ pattern.

If we have scenes that the main soul didn’t (and in some cases couldn’t) take part in, then I suspect that means that The Pattern is the one that knows of these stories.  When they converted/absorbed/whatever the people in question, all of these experiences were brought into The Pattern – or The Pattern was made aware of them.

On the other hand, each ‘main soul’, which has that semi-independant existence, needs to be communicated with in order to get the ‘black hole’ parts of the story.  The communication is done by tuning into that soul, or the memories of that soul, and once that’s achieved the memory can be shared.

I’m unsure if these are independent ‘souls’, or just Pattern-Kate’s memories of the residents.

The ‘flowing orbs’ that represent one person in each ‘chapter’ could be seen as the representation of a person who had the most influence in that area. The fact that it flows between various events, including the ones that must be ‘tuned’ into make me think they’re only semi sentient, if that.  They simply seem to move between events.  So perhaps they’re just light shadows of the people. 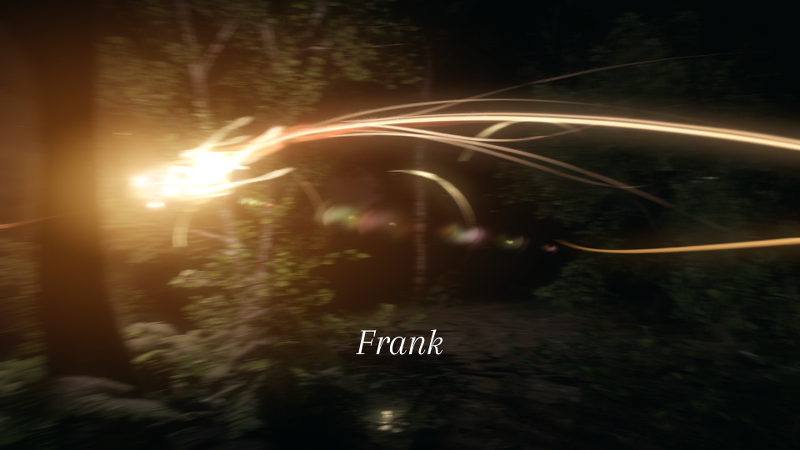 Introducing Frank. Either his memory, or his avatar. Who knows?

Other ‘big players’ don’t get their own orb, but are certainly represented by people shaped swirls of light in the little vignettes that play out. 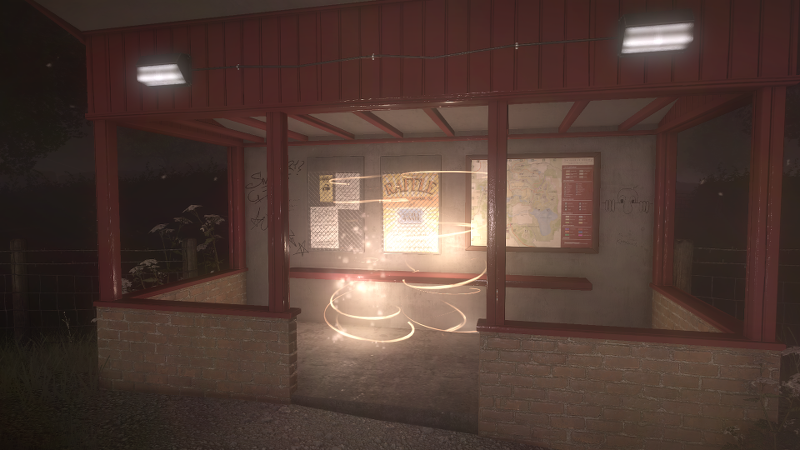 Stephen and Kate talking. A memory? A recreation?

A Geeky Gamergrrl who obsesses about the strangest things.
View all posts by Lisa →
This entry was posted in Video Games and tagged Analysis, Everybody's Gone To the Rapture, Explorable Story, PS4, Video Games. Bookmark the permalink.