Timezones are a pain.  Whether you need to know what time it is in another country for business reasons, or so you don’t wake a friend up at 3am, they’re sometimes a little tricky to work out.  It gets even more interesting when you take Daylight Savings into account – given how random that sometimes is – even between states in the same country.

Now, with computers and smartphones, this is basically a “solved problem”. You can find a lot of places that will tell you what time it is where you want to call.  On the other hand, coordinating people through timezones, especially if they’re not that technological, can still be a little tricky.

Dave Grossman of Phrenopolis, (and a few little things like Monkey Island and Telltale Games) has come up with an idea that’s both silly, and clever – as might be expected with someone of his background.

International Color Time is the result. 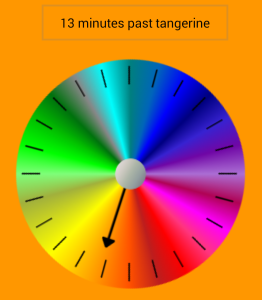 The idea is wonderfully simple.  At the same instant, everywhere in the world is the same colour time.  As I’m writing this, for example, it’s 16 minutes to mint for me, and for everyone else at this exact moment.

The colour aspect actually has a couple of benefits over traditional ways of doing this.

Using UTC (Coordinated Universal Time) makes just as much sense, and using an App to tell you when it’s 0500 UTC time would give you the same result.  However, colour is much easier for many people than just numbers.  Numbers have too much “context” in our heads (see the article Dave wrote at the page above), and people may want to keep relating them back to ‘real times’, so colour simply removes context, making it far easier on certain people’s brains (mine, for example).

The second benefit that it’s silly and kinda fun to say “I’ll meet you at five past sage.”  Adding fun is always a good thing to do, I find.

To make it easier on us, Dave has put up two versions of an Android App: paid and unpaid, to help you tell what colour time it is.  Or you can just head to the webpage (linked above).  An iOS version is apparently also coming ‘Real Soon Now”.  No word yet on any version for the Nokia 3310.

Of course, the world’s standards bodies are yet to include this in any proposal, but I feel confident that once they stop laughing, they’ll see how much sense it makes.

Hmm, it’s nearly mint.  Must be time for dinner.