There is some circumstantial evidence that I’m an adult:  I have a full-time job (which has been kicking my rear far too hard lately, hence my absence); I pay rent; I own and drive a car – legally, even.  On the other hand,  I like my Monster High dolls, and my Transformers figures, and playing with LEGO.

Still, regardless of my status as an adult (responsible or otherwise) it didn’t take much for my Love to talk me into buying Skylanders. 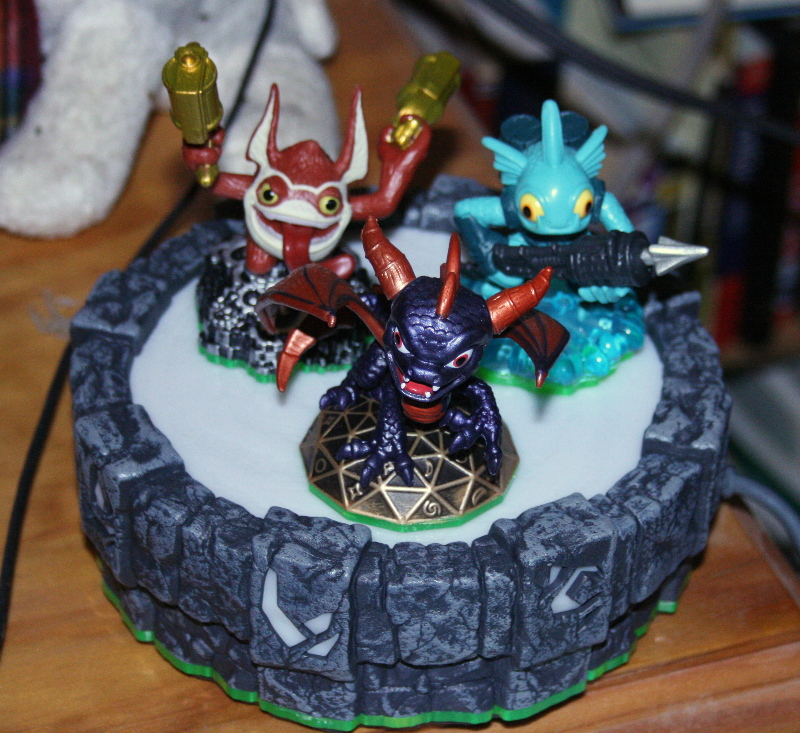 The Portal with Spyro (front), Trigger Happy (back left) and Gil Grunt (back right).

Skylanders is a game very much in the Pokemon mould.  There are lots of cute characters (Skylanders) to collect and you use said Skylanders to either battle KAOS in the Adventure mode, or battle other ‘”Portal Master’s” Skylanders in Battle Mode.

The whole thing begins with a Starter Pack, which is available for the 360, PS3, PS and 3DS (Though I’m told the 3DS version is very different).  I got the 360 version, of course.  No matter which version you get, you start with three Skylanders and the Portal (all shown above).  To use a Skylander in the game, you put the figurine on the Portal.

The Portal idea is quite neat.   It’s got that mixture of “ancient” and “techy” aesthetic and it’s fairly quick to work out which Skylander you’ve placed on it.  It also stores the information about your Skylander (which level it is, upgrades, armour, etc) in the Skylander figurine itself – so it’s a two way communications path.  You can (apparently, as I haven’t played with this much) put up to three figurines on the portal at once: up to two Skylanders, and/or a location figurine, or a magic figurine.  I have no idea (yet) what those last two mean, but I will …

And this is where the whole Pokemon style marketing comes in. To start with, there are eight “elements” of Skylander: Earth, Air, Fire, Water, Tech, Life and Magic.  You’ll need at least one of each element to find all the areas in the game.  So that’s at least five more Skylanders to buy.  Within each element there are four Skylanders.  That’s (currently) a total of 32 skylanders.  Add in the Location and Magic items and it’s a beautiful marketing strategy.

But wait, there’s more.  The Starter Pack comes with a poster of all the Skylanders available, and the Skylanders themselves come with stickers of their name and an image of the character.  As you collect Skylanders you can put the appropriate stickers on the poster and keep track of your collection …

How can you not be impressed by the thought that went into this?  And personally, I love the use of technology in this!

The game is shown from a third-Skylander-floating-perspective.  The graphics, as you’d expect, are cute without being too cutesy, and are colourful and evocative of whatever the local style represents.  I especially love the Cyclops castle, with all of the eyeballs watching …

As you’d expect, it’s not ultra-mega-hardcore.  To me, it’s very much like the LEGO games.  It’s “easy” without being so easy there’s no challenge.  There’s also a lot to explore, and extras to get in each level (or Chapter, as they’re called), so if you’re a collector/explorer type as I am, you’ll love this.

Each Skylander has a main attack, and a secondary attack.  There is some basic ‘aiming’ in the main attacks, in that your projectile will often curve towards an enemy.  Though this isn’t always guaranteed.  Sometimes it just does what it damn well pleases.  The secondary attack is usually slower, but covers a wider area.  There also appears to be a tertiary attack (ground pound, for Spyro) but I haven’t got one of those yet, so I’m not sure how they work.  With all these attacks, you’re at least well armed against KAOS’ minions.

There are times, of course, when your poor Skylander can’t take any more punishment, and needs a rest.  Or to put it another way, you’ve let them run out of health.  At this point you have to take them off the Portal, and put on a fresh Skylander to keep battling onwards.

Actually, this is one of the great joys of the Portal idea.  You can take your current Skylander off the Portal and replace it with another at any time.  This means that when you (for example) find an area that only a Tech Skylander can access, you don’t have to come back later.  You just replace your current Skylander with a Tech one, and go and explore the new area.  It’s quick, it’s easy, and I have to say, that the physical interaction adds a lot to the game.

Though the game uses more than that for ‘physical interaction’.  The right stick is used for various actions in the world: You push it forwards to push a key into a lock; you shake it from side to side to open a chest or present box; you swirl it around to turn something.  It’s a concept I rather like.

Did I mention ‘collecting’ earlier?  Of course I did.  There’s a lot to collect.  There’s treasure, of course, which you collect for upgrades.  However there are also chests (usually containing treasure), and Legendary Items, and Hats (armour), and more!  In addition, each area has a check-list of things you need to do to gain stars in that area.  So far, completing the basic chapter seems to give you enough of the first check-list to gain the first star.  There are two more check-lists, giving three stars for each Chapter.

So, I’m having a lot of fun playing this, and I have an advantage over any child playing this: I don’t have to wait for my parents to buy me expansion packs.  I just need to find them in the shop.  At Christmas Time.

Ok, maybe not such a big advantage.

A Geeky Gamergrrl who obsesses about the strangest things.
View all posts by Lisa →
This entry was posted in Video Games and tagged PC, PS3, Skylanders, Video Games, XBox 360. Bookmark the permalink.