So, You’re New To Android?

Being a geeky type person, I had a lot of fun working out how to use the Galaxy S by playing around with it.  Which I had to because whatever Samsung are good at, it’s not manuals.  However I also had to learn some new terms, and learn new ways of doing things.  I thought writing this might be useful to others.

Remember that I’m talking about the Android, and specifically I’m playing with the Samsung Galaxy S, but I believe some of this applies to the iPhone too.  Maybe.

It’s sometimes hard to know where to start when explaining things to someone new.  Often you have to refer to things you haven’t explained yet in order to explain something else.  Hopefully I can avoid this.

Home Screen and a Quick Tour 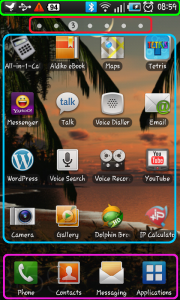 The first thing you see with Android phones is what’s known as the “Home Screen” (shown on the right).  The idea is that this screen contains all of the information/actions you need to access quickly. It’s also the screen you can return ‘home’ to when pressing the ‘home key (center key at the bottom of the Galaxy S).  Think of it as place you can get to everything else from.

Let’s quickly go through the basic parts of the Home Screen.  I’ve annotated the image on the right to hopefully help us.

The bit enclosed in green at the top is the “notifications area”, where the phone can give you a quick summary of the state of things.  As an example, I’ll take you through the icons from left to right.

The Bluetooth, Wi-Fi, network signal, standard battery indicator and time are “standard” things that can appear in the notification area.  The usual ‘rule’ is that a standard one will appear on the right, whereas non-standard ones (like tweetdeck) appear on the left.  Like anything in this world, though, that’s just a guideline.

The next area to look at, circled in red is the Home Screen indicator.  Whether this exists or not depends on your phone.  For the Galaxy S there are 7 circles across this area, each representing a Home Screen, with the leftmost one (1) being the default.  You can see we’re currently on Home Screen 3.

The area marked in light blue is the actual Home Screen area.  It’s here that  you can put icons of things to run, or things to display information.  We’ll get to that when I talk about “Applications and Widgets”.  One thing to note here is that the home screen is a grid of “spaces”, with each space being one “icon” big.  Some things take up just one icon space, while others can take up two, or more.  Here I’ve deliberately used things that are only one icon big to show you how it’s laid out.

The last area, marked in purple, is a static area (that is, can’t be changed easily) that is accessible on all home screens.  On the Galaxy S it contains, from left to right:

Keypad Dialler brings up a standard phone keypad to allow you to dial phone numbers.

Messaging brings up the SMS/MMS messaging application to allow you to read, send and manage SMSs and MMSs.

Applications brings up a display of the installed applications.

With that done, it’s probably time to discuss …

These are two things you’ll hear about with Android, and many people (myself included) start out either being confused by what they are, or what the difference is between them.  The short answer is that widgets are something that show information and an application is something you run.  Like all short answers it isn’t the complete answer, but it’s a good start.

A Widget, on the other hand, is something that displays information on a Home Screen.  This “something” may be number of unread SMSs or the weather forecast, or today’s appointments.  A Widget can be small, taking up one “icon” worth of space, or it can take up two or more icons worth of space – right up to filling the screen.  In the Galaxy S’ case, that is 4 icons by 4 icons – or 16 icons in total, as I showed in the pretty annotated image above.

Let’s pause here to talk about how Widgets and icons are displayed on a Home Screen.  On the right is an annotated view of a Home Screen.  Here I have 4 Widgets, and 5 icons.  I’ve mainly put in the icons to make the “grid” on which these are laid more obvious.

A Widget can also take up the entire screen, as the next image shows.  The calendar widget in this case is a full four spaces across by four down – or a 4×4 widget.

I should note that many widgets come with an application.  If you put a widget on your home screen, then often touching that widget will run the application.  However, sometimes a widget is purely for display and you don’t run anything by touching it.  The best way to find out which is which is simply by touching, and playing.

Firstly, it’s all about touch, and there are various ‘touches’ or ‘gestures’ that you can use to tell the phone what you want.  The most basic is the ‘tap’, where you literally tap the screen with a stylus or fingertip.  Then there’s the ‘press and hold’, where you touch the screen and hold it for a few moments.

On the Galaxy S there are three buttons at the bottom of the device.  From left to right these are:

Other devices may have more, but I believe these are pretty standard.  Let’s go through each one.

On the Galaxy S this is a touch button – that is you just need to touch it, you don’t press it. This brings up a menu. What menu that is depends on what application you’re running.  If you’re on a home screen the menu allows you to change the wallpaper, or access the settings menus.  It also allows you to search, edit your home screens or look at notifications.

In an application, you might get a menu to add a new item, look at the application settings and so on.

On the Galaxy S this is an actual button you press.  A quick press will take you back to the Home Screen, no matter what else you’re running.  A longer press will bring up the last six applications you ran, so you can select any of those to run again.

How do I get out of here?

This brings up a point where Android is different to many other systems.  Most applications in Android don’t have a specific “Exit” function – instead pressing the back button enough times will exit the application for you.  However, this isn’t always the case, and sometimes back will just put the application into the “background” (i.e. it will still be running, but it won’t be visible on the screen).  In most cases these applications will have an explicit way to exit.

The ins and outs of  shutting down applications, and the exceptions to the rules, is probably another article away.

I hope this has helped a few of you new to the whole Android experience and means that you can begin using your phone more “productively”, or get to playing games more quickly.