I’ve played a few games called “The Room” over the years.  Most of them followed the idea that you’re trapped in a room, and you have to solve a series of puzzles in the room to get out.  It’s an interesting take on the puzzle/adventure genre if done well, as you know everything you need is there – you just can’t always find it.

This version of The Room, for Android and iOS, is a little different. While the puzzle aspect remains the same, in this case you’re not trying to get out of a room, but find out what’s inside a safe that’s inside a room.  There are also hints that perhaps there might be other rooms later (so more games in this vein, I’m assuming). 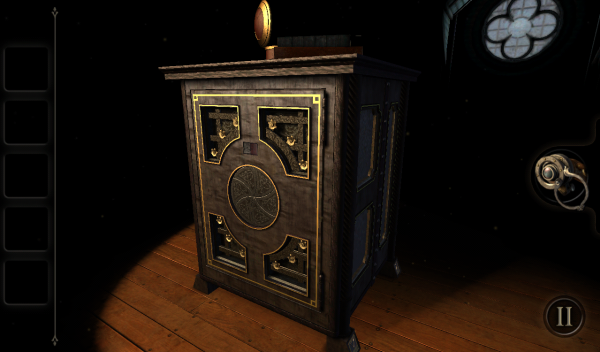 What’s inside the safe?

I’ll say up front that despite having solved the game (in about 2 – 2½ hours), I’ve played through the game twice more.  Why?  Because of the atmosphere, and the hints of an intriguing story.

The graphics, the minimal music, the sound effects and, in fact, the puzzles themselves all form a part of the atmosphere, and the story.

The puzzles are mostly well done, and follow a logical progression.  Usually it’s a matter of examining and poking and prodding everything to see what happens, or find what youv’e missed.

And I really do mean “poking and prodding”.  The wonderful thing about this game is how well they’ve used the touch interface.  You use swipes to rotate your view, you turn keys with a circular motion, you stroke to slide something.  Everything is done in much the same way that it’s done in real life.  In the main, they’ve all been ‘tuned’ well, so you rarely feel like you’re fighting the interface to play the game – instead it’s all quite natural.

About the only sections I “dislike” is those that require you to tilt your device to solve puzzles. I tend to play while lying in bed, and that means some rather interesting contortions to solve those sections.  In fact, until  I read the hint, I didn’t even realise that moving the tablet would alter the puzzle!  Still, I can’t blame them for using that mechanic, and it does fit well into the world. I’m just a little strange in how I play things!

As I’ve just mentioned the game does dole out occasional hints – sometimes telling you that perhaps you should ignore this bit and focus on that bit, or perhaps telling you that whatever you’re doing won’t work the way you’re trying; a hint that another may might work.  If you’re really stuck, then you can ask for hints.  The good thing is that many of the hints begin with prodding you to perhaps look for anything you may have missed previously. You can get more explicit hints, but I always found the little nudge the initial hints gave was good enough.

The other thing is that I found the puzzles fun.  They’re different enough to most puzzles in games, or dressed up differently enough, to feel fresh.  Some are slightly whimsical, some are definitely part of the world they inhabit, and wouldn’t be possible elsewhere.  Solving them really does bring a feeling of achievement.

I have to return to the atmosphere.  There’s a subtle feeling of “otherness” which grows as the game progresses.  There are also hints of horror.  Yet nothing is overt and any real horror is held just out of sight.  That the game manages to sustain that for its entire length is wonderful, and I really hope they can do the same with any future game.

I think one reason I keep replaying this is for that atmosphere, and because I want more of this game – but there isn’t anymore yet!

A Geeky Gamergrrl who obsesses about the strangest things.
View all posts by Lisa →
This entry was posted in Video Games and tagged Android, Android Games, The Room, Video Games. Bookmark the permalink.