1 … 2 … 3 … KICK … oh to hell with it – I’m just going to call this Ugly Baby.  Ugly Baby is, as you might guess from the name, a game that has something to do with music.  I wasn’t sure if this was going to be a Guitar Hero  type of game where you press specific buttons in time to music, or perhaps more a Simon Says type game where you try to repeat whatever the game throws at you.

Neither are correct.  Ugly Baby is slightly more experimental – and is still in development. It’s a cross between a music visualiser and a game.  You choose a tune (one that they provide, or you an add your own) and a “city”. The game analyses the music and then you find yourself flying through a 3D city that reacts and changes in some way to the music.

Your ‘craft’ is controlled by the mouse, meaning you can change the direction you’re moving and also rotate left and right using the buttons.  You’re somewhat limited in which directions you can move, and it’s more like falling through a city than flying as you can tilt but not stop, or turn back on yourself.

In the beginning there’s only one “city”, but get a high enough score and you open up more cities.  No matter which city you use, however, you can choose whatever music you own to play that city.

The cities react in various ways from simple pulsing of colour, to more obvious movements of pieces of the world.  They’re each made up, mostly, of various cube shapes and usually as you fly (fall?) you see the shapes moving into place some distance in front of you.  Some shapes settle into place and remain there as you shoot past, others swirl, twist or shuffle in some way meaning you risk hitting them.

Each city starts out desaturated.  However as you perform “stunts” (of which more below) it begins to light up, and can become quite bright and colourful. 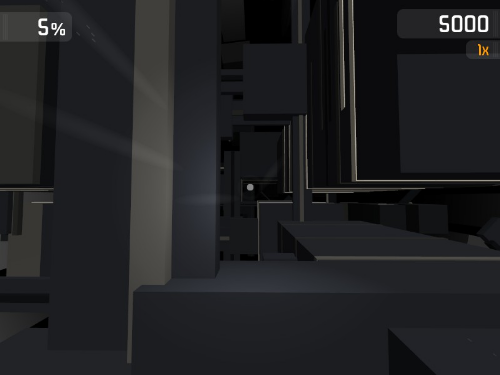 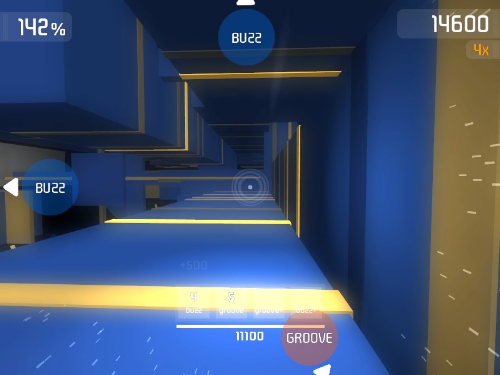 Scoring is something I haven’t worked out yet, but as you perform “stunts” like “buzz”ing (fling close to an object) you get various “BUZZ” indicators.  Occasionally you also get “GROOVE” indicators – whatever that means.  Both of these also give an audio indication. The bottom of the screen fills up with counters of “buzz”es, “groove”s, “buzz mega”s and more.  At least, as long as you keep close to things.  A bar beneath all this quickly diminishes between stunts and disappears entirely if you take too long.

Hitting an object just rocks the display a little and you hear a loud “BONG”, as well as losing whatever list of stunts you’d accumulated at the bottom of the screen (and their associated score).  Beyond that it doesn’t seem to do much for you – but it can break your “flow”.

I still haven’t made up my mind about this game yet.  I’ve found that you can play each city with very different “feels” depending on the music.  Some AC/DC gives a nice, frenetic feel.  Icarus (theme for Deus Ex: Human Revolutions) makes it a sweeping, uplifting experience.  Some Pink Floyd (from Dark Side of the Moon) turns it into a quite trippy, mellow experience.

There’s something not quite “right” yet about it. I’ve been playing it a bit lately trying to work out what it needs added (or taken away) in order to give my thoughts to the developers. 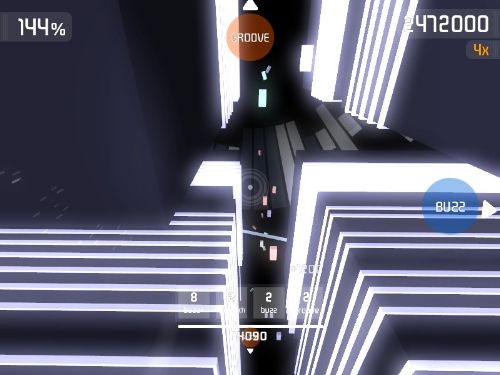 Every now and again I get really exhilarating feeling of flying through a real place that’s generated by the music – yes, like flying through the music.  Those times, however, are few and far between.  I also seem to get more of a thrill while rotating as I fly close to objects.  I guess part of me isn’t sure if the game should be encouraging this more, or if they should be giving me the most freedom to find a play-style I like.

I’ll keep thinking about it, because this game really intrigues me, and I’d love to see it improved and become something incredible.

A Geeky Gamergrrl who obsesses about the strangest things.
View all posts by Lisa →
This entry was posted in Video Games and tagged 1 ... 2. ... 3 ... KICK IT (Drop That Beat Like An Ugly Baby), KICK IT, Music, Music Visualiser, PC Games, Steam, Video Games. Bookmark the permalink.